Well, as you can see, I’m more or less back in business. It has been a week from hell, I won’t lie. My new laptop is a different brand, and there are some things I’m still getting used to with it. The left touchpad button is really stiff, which means it doesn’t react the way the old one did, and requires a lot more effort on my part. Saving screenshots isn’t a one-step action on it and it took me a bit of experimenting to find the method that will work best for me. But… when is screenshots, it only captures what’s inside my Elements workspace, so I don’t have to crop them. So I guess it balances out. But… When I open them in WordPress, they’re very small and I’ve had to manually enlarge them, which made them blurry. So next week I’ll be doing something different! More details on the disaster my life has been later. For now, I’ve done a test-run tutorial to work out some of the kinks. It’s short on steps therefore short on screenshots. But it’s getting us back on the road and that’s a good thing.

Flash photography and retinas. They aren’t compatible! The aperture our irises have set is for the level of light in the room, so when the flash goes off, the irises can’t react quickly enough to shut down, and the flash bounces off our retinas, making us look like demented monsters with red eyes. (Considering this is October, it could be a desirable state, but that’s a personal thing!) Human eyes go red in flash photos, animal eyes go a really ugly green-yellow. (If you’re wondering why, animals don’t see the full spectrum of colour, and have very few cone cells in their retinas; they’re the ones that reflect red.) Of course, neither looks particularly attractive. Until Photoshop Elements 12, adjusting pet eyes was a multi-step process and a bit tedious. With PSE 12, all that changed. 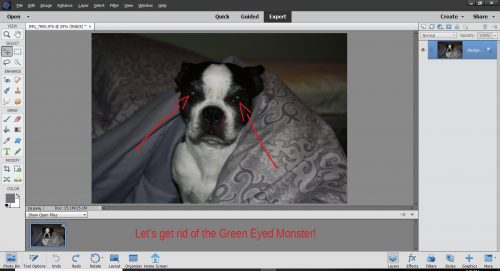 Here’s a photo of my grand-dog Lucy. It’s not horrible, but I don’t think I’d scrap it without fixing her eyes. This is such a simple, Quick Edit! 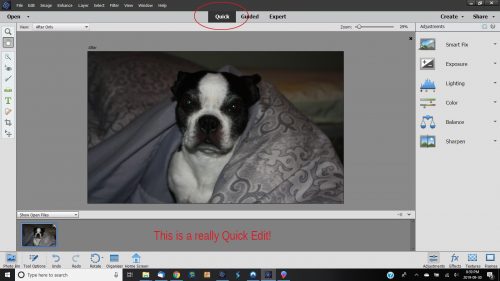 This is the basic workspace for Quick Edits. If you need to make simple adjustments, tweak for red eyes or not-quite-white teeth, this is where you’ll go. Click on the Eye Tool. 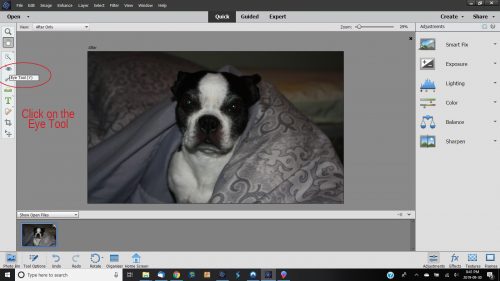 Woohoo! There’s even a single-click Pet Eye button that tells the software it’s looking for something other than red. 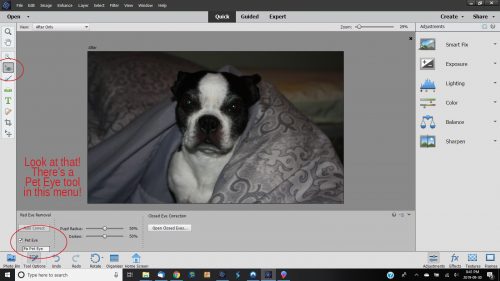 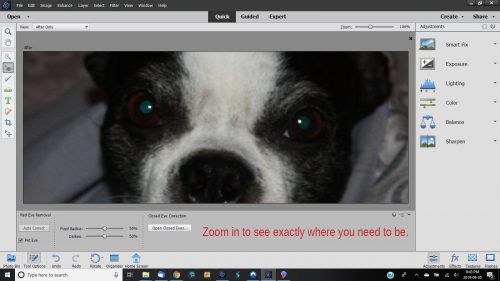 One click inside each eye and Elements has eliminated the green-eyed monster! It really is that simple! 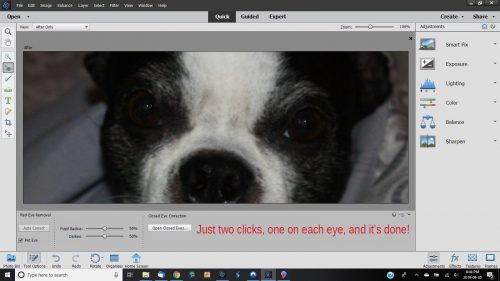 Okay, now to get serious again for a minute. My faithful readers will know that I had over 2,000 fonts on my old laptop. When I was able to access the files on it and make a backup to move to the new one, I copied my font folder, along with my styles, brushes and actions, onto my external hard drive. But I didn’t verify that the fonts were actually copied. I discovered THIS MORNING that the folder on the EHD is empty. So I spent several hours re-downloading and reinstalling a bunch of my paid fonts from the Font Bundles website. I’m far from finished – then I have to track down the free fonts I had too. What I’m trying to impart here is that when you’re finished reading this, you should immediately go to your font folder and copy it onto some form of stable storage and then back it up occasionally from now on so you NEVER find yourself following me down the rabbit hole. After you’ve copied the file, make sure the fonts are actually IN the folder! You know I’ll be doing just that later when I’ve recreated my font collection… and backing up everything else too. Time to make some good habits.