Kimmyscraps is our LOTW winner this week.  What a loving LO! Click the image to leave her some love in the gallery.
Congratulations Kimmy!! 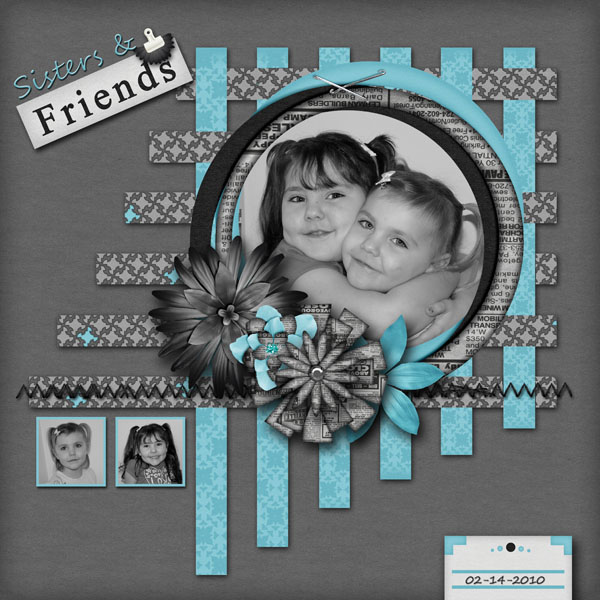 Kimmy used the kit Black & White & Blue All Over by Pretty In Green which is available here.

Don’t forget to vote for the next LOTW winner in the forum. You can be a LOTW winner too. All you have to do is scrap! Happy Scrapping.

Behind the Scrapbook the Real Lives of GingerScraps!

Hey there girlfriends! Hope you had a great week, I know the ladies at GingerScraps have been really busy with visits from the tooth fairy , vacations to picturesque locations, meeting old and new friends and helping cure Cancer… pretty good for one week I think!!

Jodi’s daughter Rebekah got a visit from the tooth fairy! She has been seeing the dentist for work on her teeth and 2 had to be removed. Rebekah was a trooper though and was happy to learn about the tooth fairy. That night she did not put her teeth under her pillow because the tooth fairy didn’t have anything for her yet, but the next day when Rebekah woke up and said “it didn’t work” Jodi explained that the teeth had to be under the pillow for it to work. So the next night Rebekah put her teeth under the pillow. The next morning Jodi asked Rebekah if the tooth fairy came. She threw her pillow off her bed and said “she did!” and was happy to see 2 gold $1 coins in the place of her teeth.
After Rebekah’s teeth were removed she had to be on a soft food diet, so after having a dinner of macaroni and cheese, she had some chocolate pudding. That’s what’s all over her face in some of the pictures.

Rebekah went into her room and put on some of her princess clothes and said that she was the tooth fairy. So Jodi gave her the teeth the dentist gave them and Rebekah posed for some pictures.

What a cute tooth fairy!

This is Rebekah showing off her two gold coins that the tooth fairy had left her.

Julie went on a little road trip with her Family and Friends! So much fun and so beautiful! I’m a little jealous!! What a beautiful place!

In Virgina City after the “Shootout”

Spotted having lunch…. here’s what Rachel had to say….

Thursday I got to meet Stephanie in person for the first time. We met for lunch and had as much conversation as my kiddos would let me. It was exciting getting together with a friend I’ve known for about 2 years.

And I got to see baby Delilah! Oh yes be jealous!

Mandy wanted to share with you a special moment….

My daughters boyfriend Ben and his younger sister Hannah took part in the Weekend to End Womens Cancer in memory of their mom Cheryl who lost her battle with Cancer a couple years ago. It was a 60 km two day walk. This was Ben’s 4th year walking and Hannah’s second year walking. Up to date Ben has raised over $12,000 towards the fight against Womens Cancers. Ben’s mom Cheryl was a volunteer and walker for this organization for 7 years before she herself had Cancer. Her team Northern Knockers still walk in her memory every year thanks to her kids. Next year my daughter Kelsey will be joining the team as a walker and I will be volunteering as a pit crew.

L to R- Dennis (Bens dad), Jackie (Hannahs BFF), Ben (playing with his Ipod), Hannah (looking too upbeat for just walking 50 km!), and Kelsey (she walked the last 7 KM with Ben in her flip flops!!)

And off they go….

And here the are crossing the finish line!!!

Have you ever volunteered your time to an organisation or raised money for charity?? If so tell us about it!!

I’m off to dig up some more dirt:) Hope you have a fun filled weekend!