I took a look at the calendar this morning and got a bit of a shock. (I’m sure I’m not the only one losing track of days and dates…) It’s going to be JULY next week! My granddaughter’s second birthday is on Monday, her cousin’s birthday the next day and her big brother’s birthday is the day after that. And of course it means that Canada Day and Independence Day are also next week. So that got me thinking… maybe I should talk about planning your celebration layouts now, so you get the best photos. Even though many of the big events usually held on these national holidays have been cancelled this year due to the pandemic, I’m sure there will be events worthy of documenting. Don’t forget, you can always come back to this post next year for a reminder too. I try to have a rough idea of which shots I’d like to get so I went to Pixabay and had a look for the basic themes for Canada Day and the Fourth of July: parades, flags, food, family gatherings and fireworks. (The photos I found were all Fourth of July – we Canucks are a little less exuberant on our national holiday, but these tips are easily adapted for a made-in Canada celebration too.)

Let’s start with parades, since they’re often in the late morning or early afternoon, and kick off the day’s events. Try to think of interesting scenes you can photograph. Look for people in costumes and try to find a camera angle that will give you an interesting composition. This photo,  taken by the contributor beccajanef, caught my eye because of the Liberty hats. I’d love to have seen the crowd afterward, with all those hats on heads everywhere. 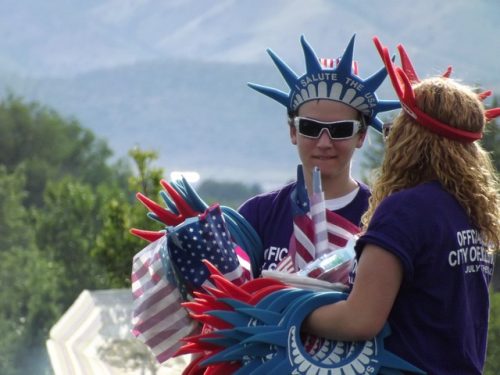 BigBearVacations gave us this shot. What I like about it is that the sun flare conceals the guy walking into the frame on the right, putting the focus on those hero-worshipping kids with Uncle Sam. At first I thought the photobomber should be cropped out, but a second look told me doing that would take away from the scale of the stilt-walker. I always wanted to learn how to walk on stilts, didn’t you? 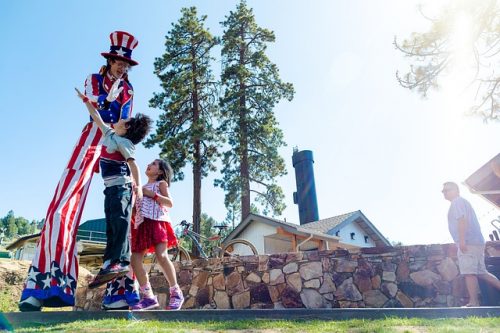 The amazing Jill Wellington took this photo, which speaks to how patriotism is learned early. The sun flare adds a softness to the photo without distracting from the subject. I love her blue-and-white dress and red bloomers too. 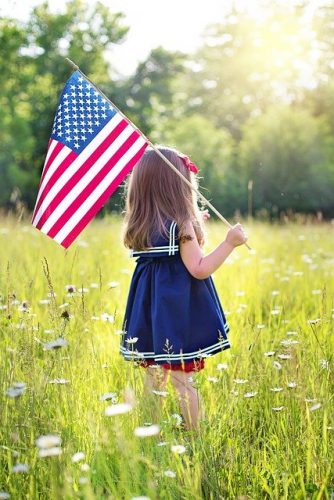 There are so many ho-hum ways to photograph flags. But filling the viewfinder with the most recognizable area of the flag, along with the draping of the fabric, elevates this photo by TechPhotoGal to a much more interesting level. It also shows that you don’t need to include the entire object in your image to create a photo with impact. 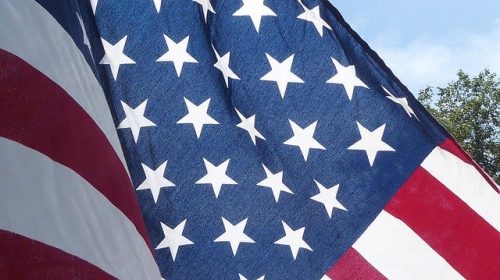 When I look at this image, credited to OohhSnapp (aka Angelique Johnson), I get the impression of a huge flag and Angelique standing directly underneath it. It has a definite God-blessed-America feel. It’s a visually pleasing image for sure. 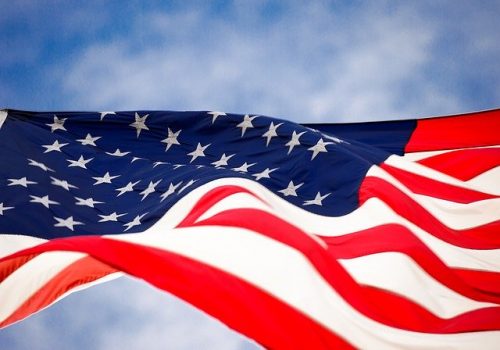 Ah! Food!! When you’re documenting the feast, look for perspectives that hint at how good the food will taste and how perfectly it’s prepared. It’s very easy to take boring food pix… but TesaPhotography (Tesa Robbins) captured a true delight for the eye.  I can almost taste the corn now! 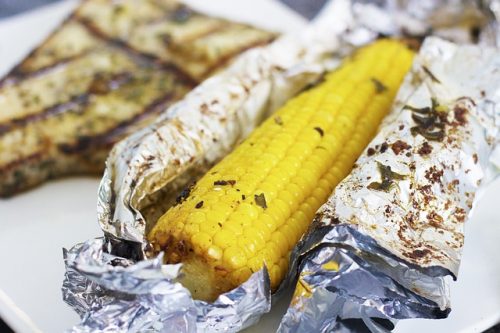 Here’s another I-can-almost-taste-it shots. Here, utroja0 uses both composition and depth of field to give us a visual feast. The skewer in the foreground is in sharp focus and the grill is only partly in the frame. Between them they give the impression of lots of food and incredible aromas. 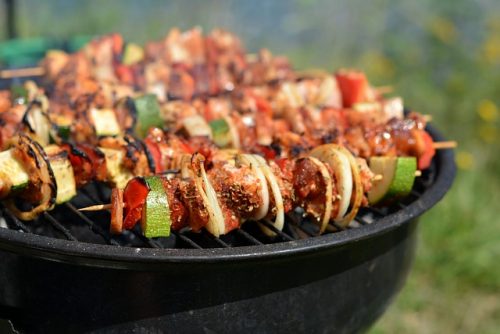 Here in Canada those ice pops (or popsicles, which is actually a trademark…) are called Rockets. And they’re my favourite. (I lived on them, literally, when I was sick last year.) No cookout or picnic is complete without the sweet finish. What makes this photo, again from the camera of Jill Wellington, so successful are the red-white-and-blue colour palette, the scatter of candy and the creamy background. The drips of melting ice cream hint at the heat of the day too, offering another clue to the kind of celebration going on. 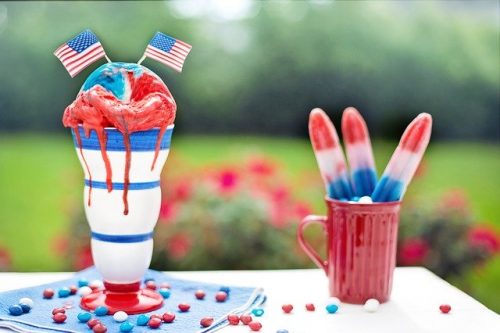 Candid photos are almost always more appealing than tightly posed ones. This scene looks so natural and it’s easy to see the kids are enjoying their picnic with their dad. The background suggests it wasn’t taken in July, but that’s not the point… capturing those special moments when the subject isn’t aware you’re shooting them takes a bit of thought and some stealth, both of which Victoria_Borodinovea managed here. But… if you really want to have a formal-ish, posed group photo, try to arrange your people so their faces from visual triangles, allowing those triangles to overlap a bit. Use a small aperture so that your depth of field is large enough to keep all the eyes nice and bright. Another option is to line the kids up, shortest in the front, tallest in the back. If necessary, have them tilt their heads to one side, alternating sides so you can see everyone’s eyes, then snap away. Everybody will be recognizable in the shot, and everybody should be in focus. 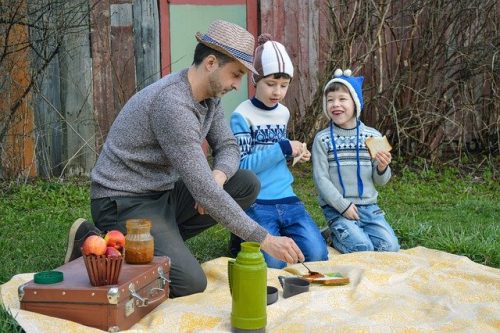 Families who have cottages at the lake or on the beach may include a bonfire in their holiday plans. Photos of these can be incredibly beautiful, but can also be just okay. I like this photo by Free-Photos because it tells the story of a campfire through imagery. 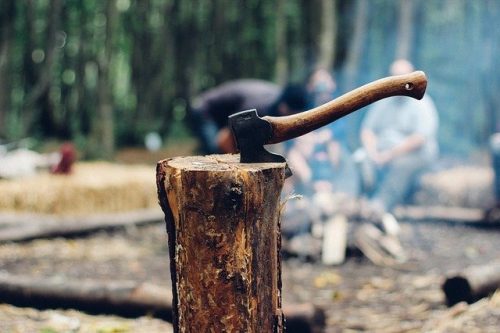 I like this shot for the texture in the charring wood, the heat suggested by the flames and the containment of the firepan. flyupmike created his appealing image by getting in close (I’m hoping he zoomed the camera and not the photographer!) and intentionally cropping his shot in the viewfinder. This gives context to the image. Your could add context to your fire photos with silhouettes, or framing the flames in some way. Zooming in even more closely to capture the intensity of the burning fuel would work too. 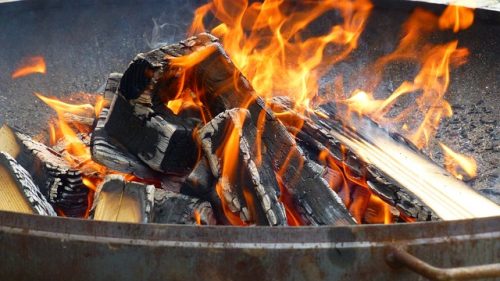 Is there any better reason to have a bonfire than to make smores?? This tight shot of a toasted marshmallow, taken by skeeze, would immediately make me want to have a smore – and I don’t particularly like them! 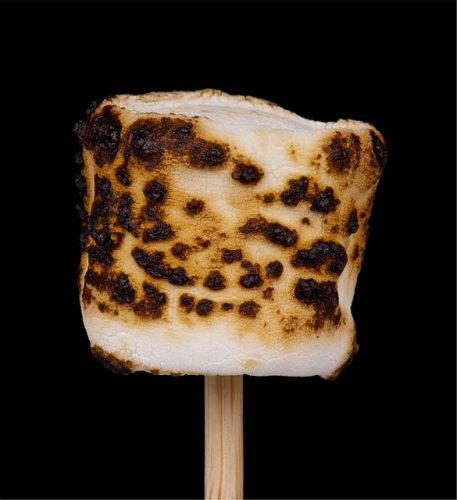 Everything about this photo says “Fourth of July” to me: the flag in the background, the sparklers and the hint of a smile on the only face visible. The depth of field has the sparklers in sharp focus – where it should be, softening everything else into background. Free-Photos got it right again! 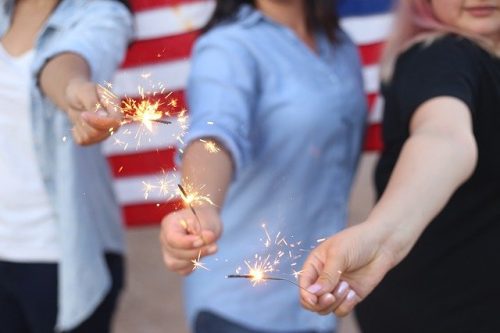 Doesn’t this photo just shriek JOY? Jill Wellington knows how to use her camera to capture the most captivating images. She has the children in silhouette to draw the eye into the scene and the upflung arms reveal the excitement of seeing the light show. The fast shutter speed she used froze both the girls and the fireworks, while her small aperture got the whole scene in focus. 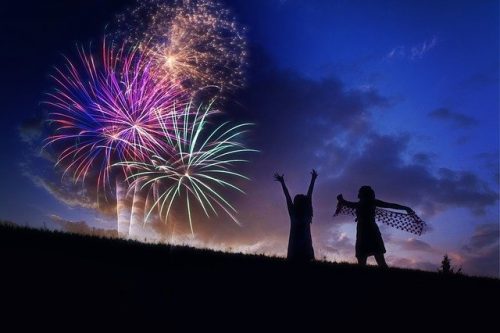 Photographing fireworks is a real challenge. For more tips on how to get the best shots, Darlene Hildebrandt offers her tips here. The most important ones are the quality setting, figuring out where in the sky the bursts will appear, shooting into the eastern sky with a medium aperture, starting early in the show to avoid the smoke and using a TRIPOD. You want that camera stock still to get the best images. I just checked out the camera on my Android phone and it has some pro settings I’m going to have to play with. Our new house will give us a ring-side seat for any fireworks in our city, since we’re halfway up a mountain with nothing built behind us!

I’ve been gathering ideas for future tutorials and have some great ones lined up, so stay tuned!